There are many machines and sensors which can emit streams of data over a serial interface and also receive control commands over the same interface.

Octave includes a Universal Serial Parser (USP) service that accepts such data from a serial interface on an Octave edge device, and makes it available as Resources. The data can then be interpreted in an Edge Action script to extract valuable information. The service also provides the capability to send commands via this same serial interface.

The service is exposed as any other Octave Service (e.g., Modbus, CANopen , GPIO, etc.). The service receives a configuration from the cloud and exposes Resources to read and write data from the serial link.

For edge firmware release 3.1 and above:

For 3.2 and above: USP on both UARTs at the same time is supported.

You can work with USP ins two ways:

Before continuing, it's important to understand the three strategies available to adapt to the way messages are framed on the serial link using USP:

Once the number "length field value" + "offset" is reached, the service writes the content of the buffer to the variable /value.

Configuring USP via the Service Page

This screen is available for devices with edge firmware 3.1 or above. Devices with a lower firmware version should use the manual configuration procedure indicated further below.

Octave's USP configuration screen provides a convenient graphical UI to configure USP (i.e., to configure /usp/config without having to work directly with JSON). 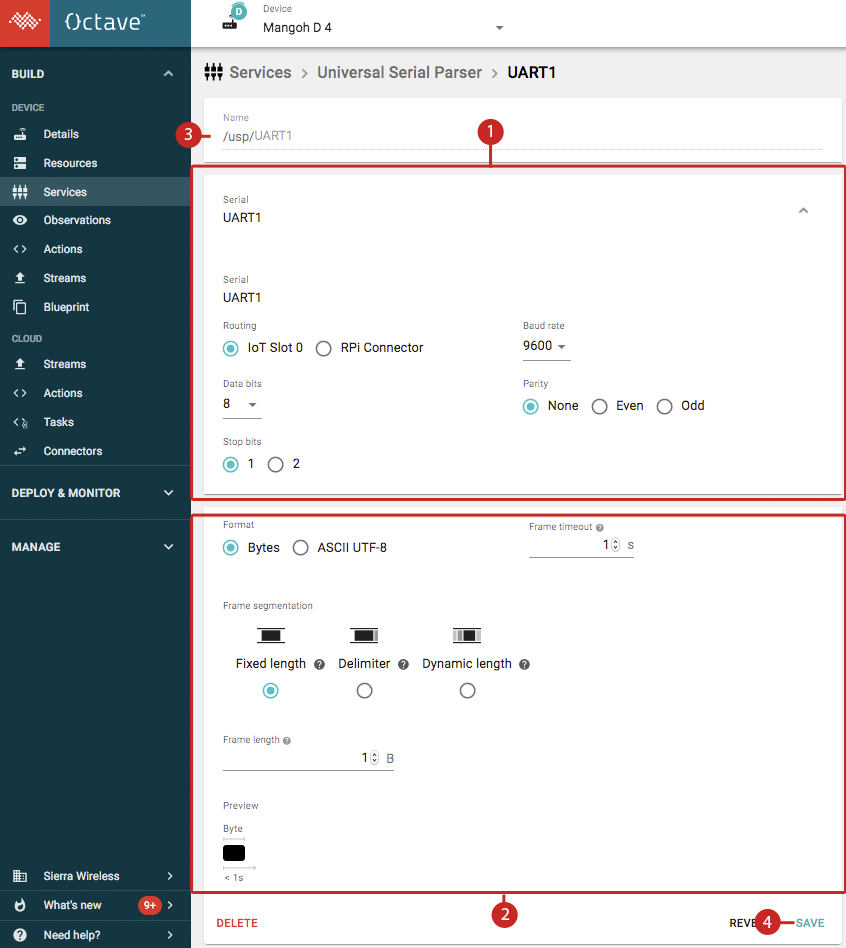 The following general settings can be applied: 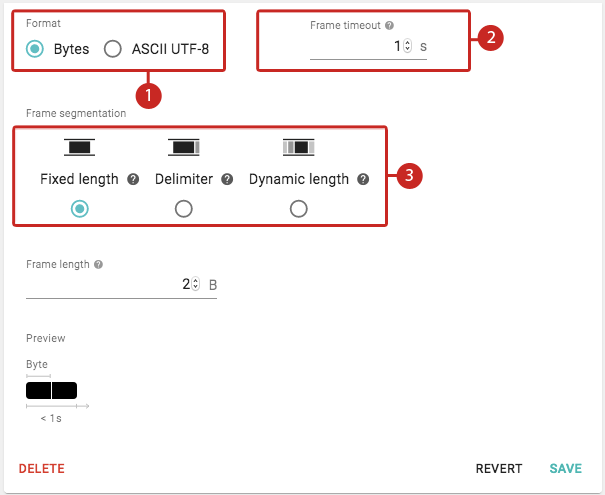 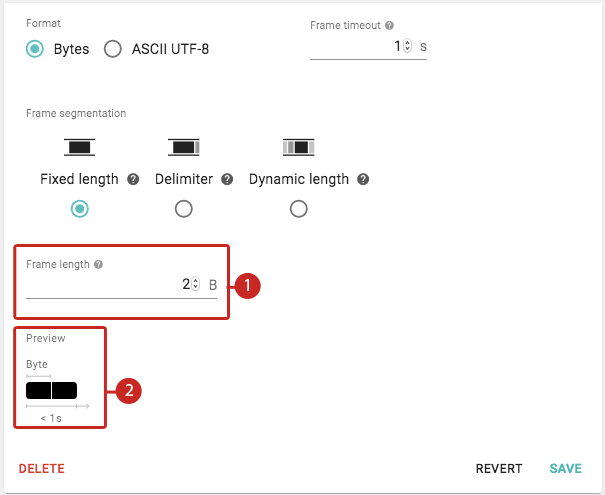 Delimiter provides the following configuration settings to define frames of data consisting of a variable number of bytes for the payload and a delimiter to mark the end of a frame: 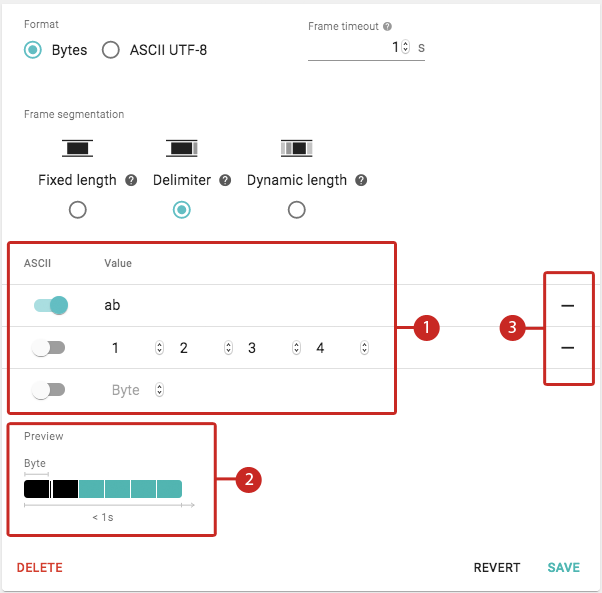 Dynamic length (applicable only to the Bytes format) provides the following configuration settings to send variable-length frames of payload data: 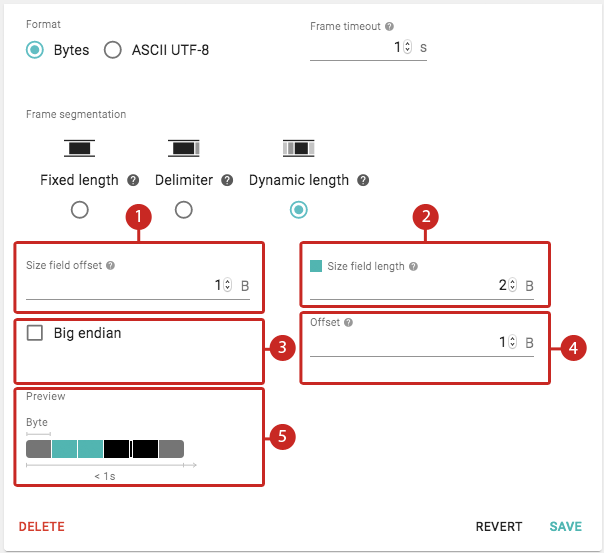 The following sub sections show to how work directly with the USP-related Resources to configure and communicate using USP.

The USP service is configured by modifying the JSON content in the /usp/config Resource:

The framing values fixed, delimiter, and lenField correspond to the Fixed length, Delimiter, and Dynamic length Message Framing Strategies respectively and are configured as follows:

In firmware versions below 3.2.0, USP Resources are accessed via the following fixed paths:

With support for multiple USP links in firmware 3.2.0 and above, you can specify a unique name by adding the (optional) name field for the USP link via the /usp/config JSON. The value and write paths are specified according to the following rules:

Sending Data via the /usp/write Resource

In order to send data, you must write a JSON document to the /usp/write Resource.

The data entry in the JSON document contains the bytes that are to be sent on the serial link.

The data must be formatted as an integer array of up to 8192 elements, where each integer value represents a byte (0 through 255).

The answer_timeout entry is optional. It allows the user to configure a timeout between the end of the sent frame and the start of the next received frame.

Example 2: Transmission of Characters when String Mode is Enabled: (supported on 3.1.x and above)

In this case, the data must be a UTF-8-encoded string containing up to a maximum of 8192 characters including the delimiter.

When string mode is set to true, and the delimiter setting is used (which should be the common case) , the delimiter will be automatically appended to the data written.

Receiving Data via the /usp/value Resource

When data bytes are received they are parsed (or counted) according to the framing strategy.

When a frame is considered complete, it is pushed to the /usp/value Resource.

If the frame_timeout time has elapsed after the first received byte without having completed the frame, the received bytes get pushed in the Resource, along with a timeout error.

When string mode is set to true, and the delimiter setting is used (which should be the common case), the delimiter will be automatically removed from the data received.

In this tutorial, we will emulate the asset sending data over USP. For this purpose, we will use a development PC, a USB-to-UART (PC-to-Octave mangOH) connection, and a Python script to generate the serial data.

In this example, we will use the delimiter strategy of extracting frames over USP:

This tutorial uses a mangOH Red connected to your development PC over a USB-to-UART bridge, via a USB-to-serial cable.

You can easily adapt this tutorial for a mangOH Yellow or FX30S (the only difference is that you will map the UART to the IoT Connector or to the main RS-232 port of the FX30S).

The example performs the following:

In order to set up this test environment, see ORP USB to UART setup.

Follow all the steps prior to launching the ORP Python script. The principles are mostly the same but we will run another dedicated script in this section.

The Service is configured by writing a JSON document to the /usp/config Resource. Here we will select 'delimiter' and define it as "X"; 88 is the decimal representation of our "X" ascii separator. USP is mapped to UART1 which we will configure to USP in the section below.

We also need to assign the UART to be owned by the usp Service in the /io/config Resource by setting "own":"usp".

We map "usp" to "UART1", and are using the Raspberry Pi connector on the MangOH Red:

In order to report the received data to the cloud, we are going to configure an Observation on the /usp/value Resource.

Navigate to the Observations screen, and create a Cloud Stream Observation on that Resource.

The output should look as follows:

The Cloud Stream Observation you have created reports events in a usp Stream. This is what the received data should look like:

You have now set up a simple asset-to-cloud data collection over USP.

Decoding the USP Data Locally and Send it to the Cloud

In order to parse the ASCII locally on the edge side before sending it to the cloud, you can do the following:

You can see the parsed data pushed periodically in the device/:default Stream:

Updated about 1 year ago