Support for firmware 1.0.x. was removed in March 2021. Devices running 1.0.x need to be updated locally to connect to the Octave platform.

Once your prototype is complete, you can then adapt and reuse the industrial-grade design as well as Sierra Wireless AirPrime modules in final production. Visit mangoh.io for more details on the platform.

Octave works with mangOH Red WP7702 and mangOH Yellow with global coverage. mangOH is a family of open source hardware platforms for the Internet of Things, that turns your ideas into commercial products quickly, delivering 90% of your prototype right out-of-the-box. Loaded with onboard sensors designed to work with Octave, you can easily configure mangOH with the onboard GPIO to extend your prototype. Visit mangoh.io for more details on the platform.

The mangOH kit includes an USB cable used to power on your mangOH and connect to a laptop or an external power supply. You have to make sure your laptop USB port can deliver 500 mA, or plug a LiPo battery to provide additional capacity. 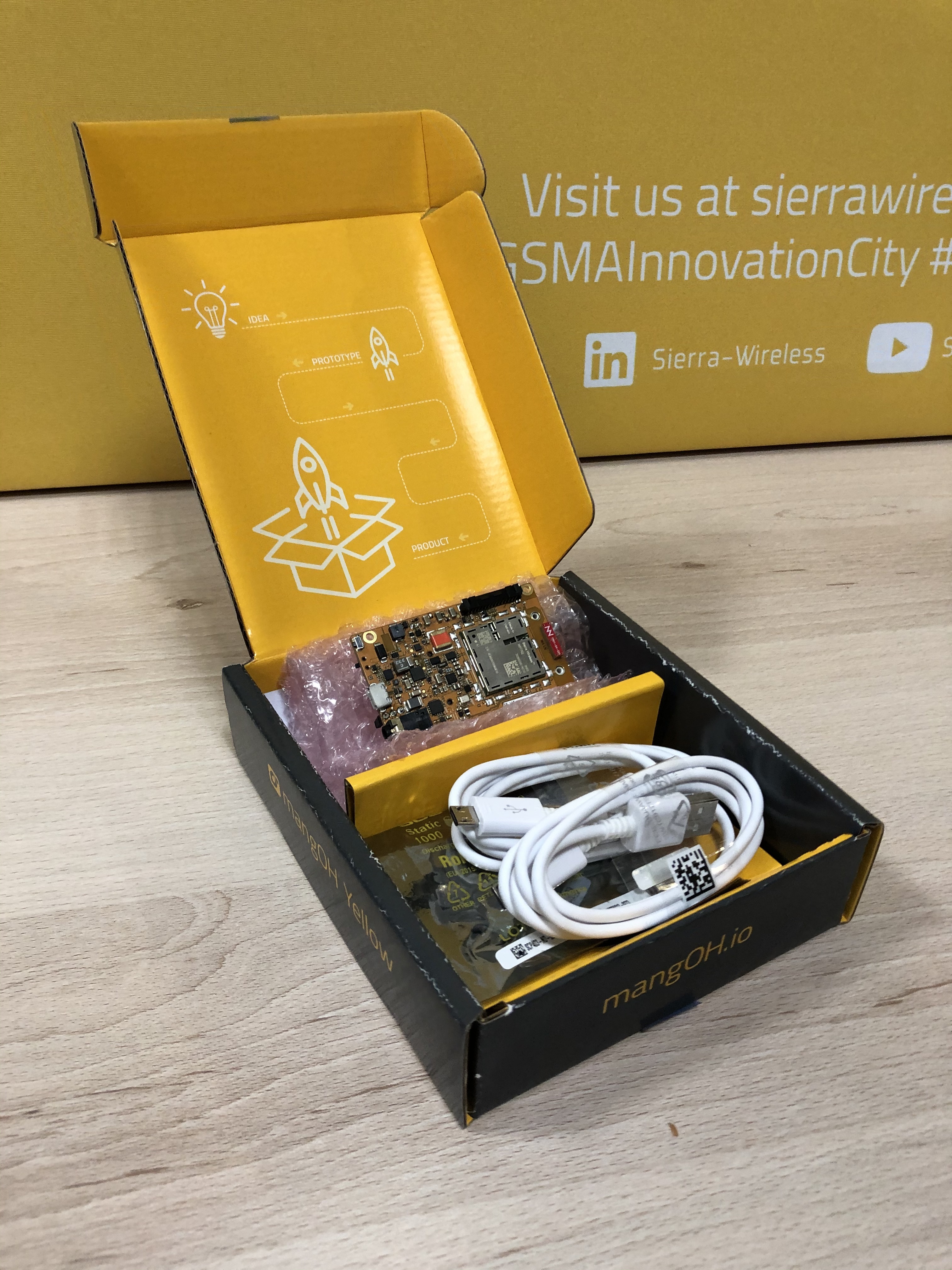 2G users are strongly encouraged to use a LiPo battery or external power supply as not all laptops can provide the current required for certain 2G operations.

Mangoh Yellow dedicated builds are only provided up to Octave 3.1.0.

Check out our Getting Started with the mangOH Yellow

The mangOH Red provides an out-of-the box hardware reference design and enables rapid prototyping of new ideas. The board provides a number of sensors: light, pressure, temperature, gyroscope, accelerometer as well as a Raspberry Pi connector and a slot for an IoT Expansion Board. Once your prototype is complete, you can then adapt and reuse the industrial-grade design as well as Sierra Wireless AirPrime modules in final production. Visit mangoh.io for more details on the platform.

The mangOH Red Octave comes complete with a Raspberry Pi-compatible four-line LCD as well as cellular and GPS antennas. The antennas are required in order to receive strong cellular and satellite signals.

The Octave kit also includes a USB cable used to power your mangOH Red from either a laptop or an external power supply: 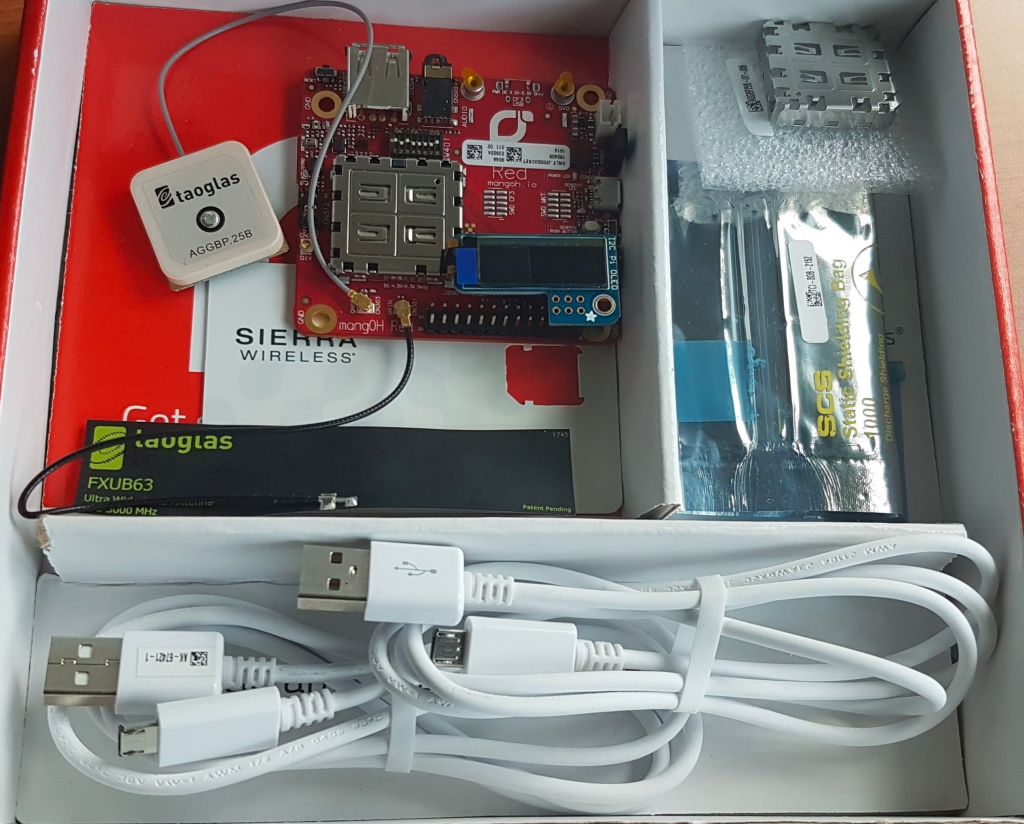 2G users are strongly encouraged to use a LiPo battery or external power supply as not all laptops can provide the current required for certain 2G operations.

The LCD is used to provide on-board feedback and to serve as a debugging output: 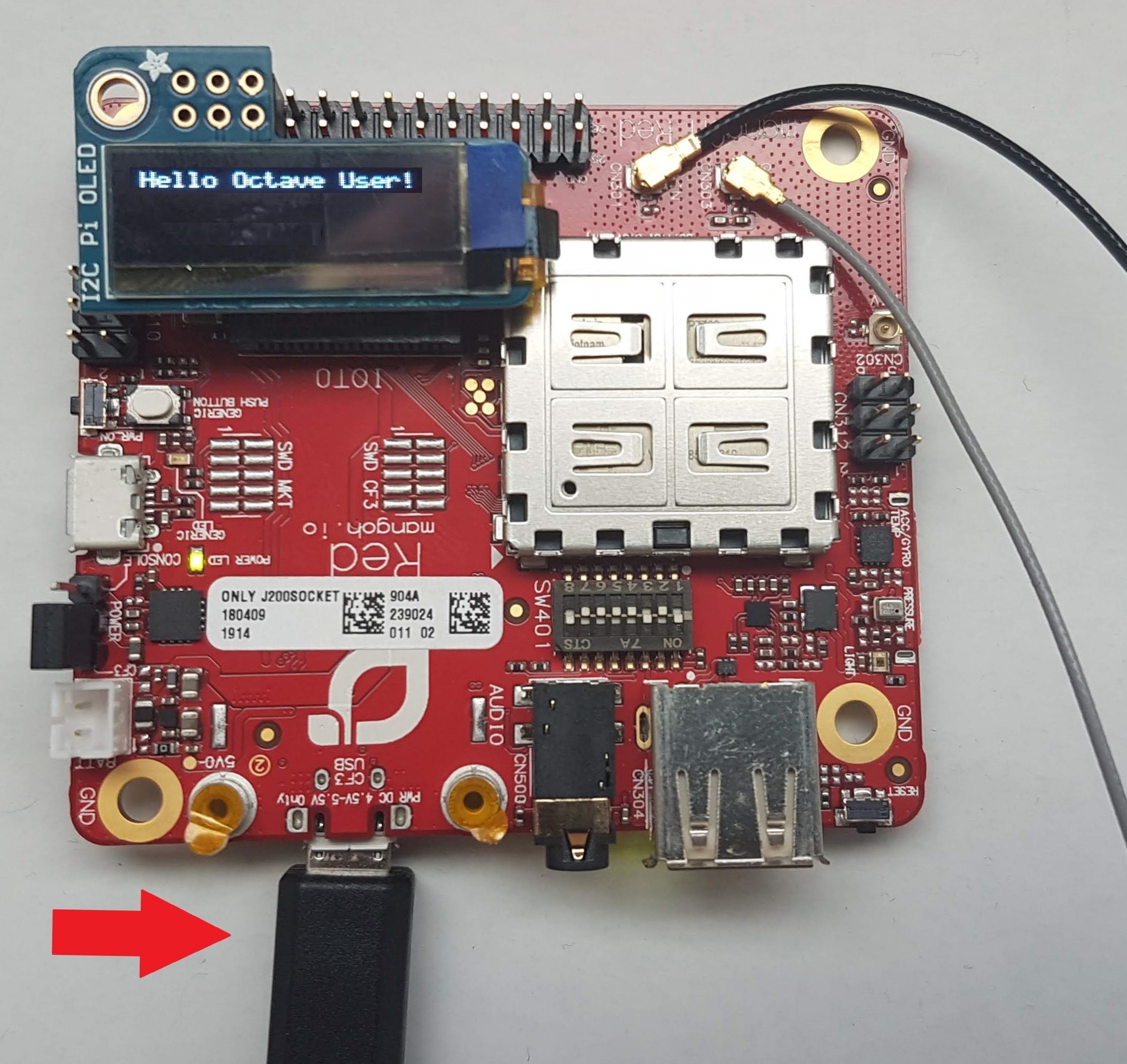 The Raspberry Pi HAT pins on the mangOH Red can be used to connect Digital Input and Output. The diagram below illustrates the GPIO pins available to the Octave IO Service (WP_GPIO 1, 2, 3, and 8) as well as current sources and ground. The voltage range for Digital Inputs on these pins is 3.3 volts. 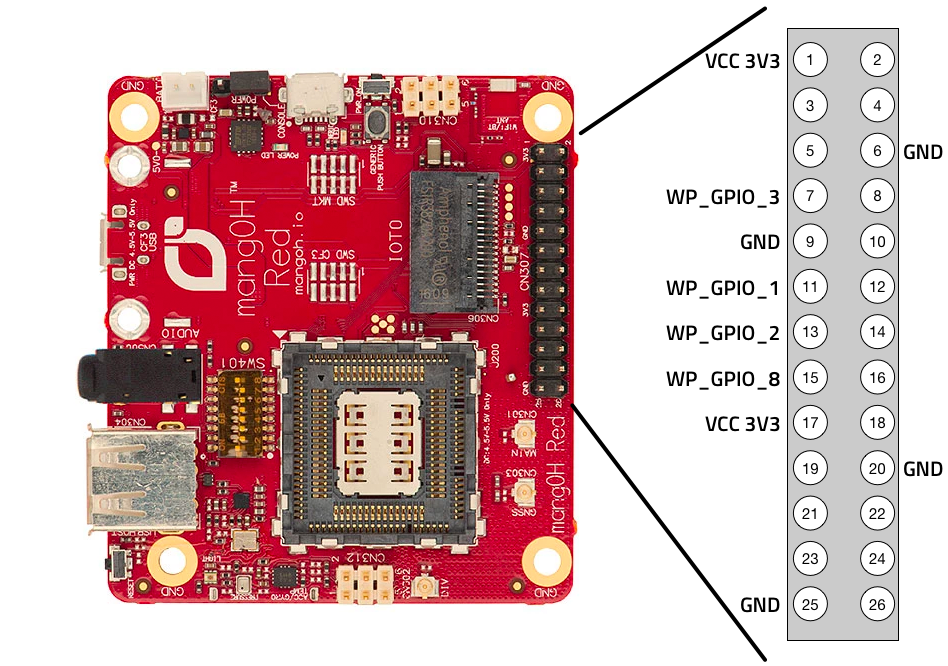 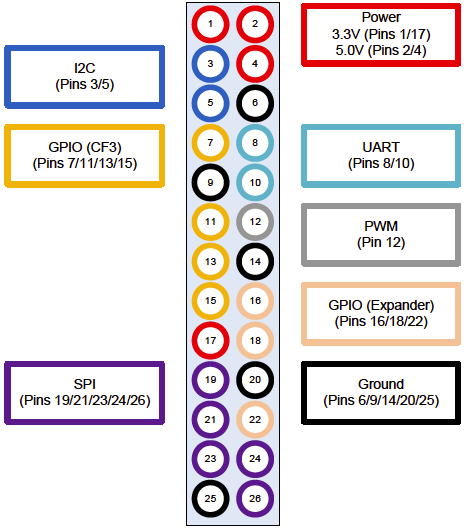 UART pins 8 and 10 are TX and RX respectively.

The mangOH Red CN312 pinout has two additional analog inputs, as well as a 1.8 volt current source. The diagram below documents the low power IO pinout. 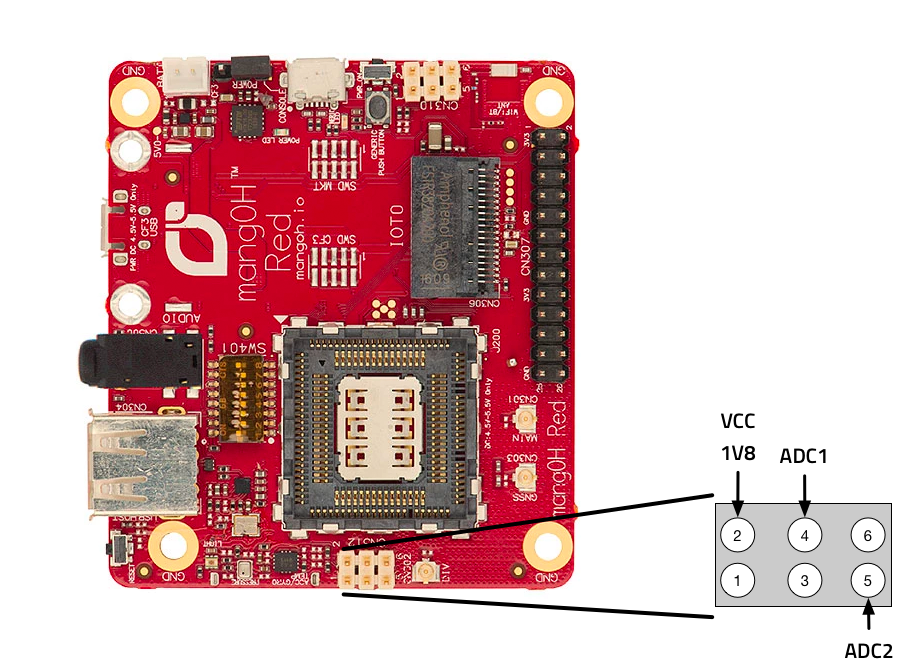 The mangOH Red includes a basic development IoT expansion board with a number of empty pin holes that you can experiment with when getting started with Octave. The pin map is provided in the next section.

Check out our Getting Started with the mangOH Red

Without Octave, the FX30 is a simple USB modem. Its full potential is realized when Octave is installed and the FX30 becomes part of your connected solution. With Serial, USB, I/O interfaces, and IoT Expansion cards; the FX30 can connect to many machines, sensors, and industrial assets. 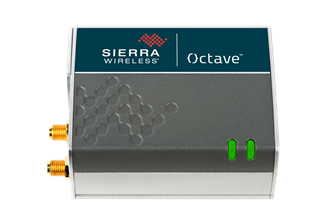 Pins 4, 5, and 6 on the FX30's power connector can be used to connect digital input and output. The diagram below illustrates the pins available to the Octave IO Service as well as current sources, the control line, and ground. The image on the left shows the pinouts of the power connector and the image on the right shows the corresponding pin receptacles on the FX30/FX30S:

Note: Internal pull-up resistors can be enabled on these pins as part of the IO configuration.

The FX30 is available with an Ethernet port that can be used for communication with devices on a Local network, for example, over Modbus TCP:

The FX30 is also available with a rear serial port and this version of the device is known as the FX30S.

The serial port supports RS-232 and RS-485 and can be used to communicate with Modbus devices through the Modbus, as well as Octave Resource Protocol-capable devices.

Check out our Getting Started with the FX30

The FX30S has one serial port that can be configured as a:
• 9-pin RS-232 serial port that connects directly to most computers or other devices with a
standard serial straight-through cable
• Half-duplex RS-485 serial interface

The pins on the DB-9 Port are as follows

In Off mode, the FX30's application processor, WWAN radio, and low power microcontroller are off. On/Off is controlled by Pin 3/GPIO24 (On/Off) and GPIO58 (Power Hold).

However, the power line from Pin 3 is also connected to GPIO58 (power hold). GPIO58 is low by default. If either Pin 3 or GPIO58 is high, the gateway is on. GPIO24 monitors Pin 3. This gives you the option to design an application that detects when Pin 3 goes low, and holds the power on temporarily to complete the desired actions prior to the gateway turning off, for example, a graceful shutdown process or a “last-gasp”-type feature.

The IoT Expansion Card form factor represents an open hardware standard for sensors, network adapters, and other IoT technologies that can be "plugged" into host applications (e.g., hardware development boards) to provide new features and interfaces. As a family, IoT Expansion Cards share a standardized footprint and pinout, with several interfaces to support various IoT technologies.

Your mangOH Yellow or Red kit will come with a prototyping board that fits into the IoT Expansion Slot. This pins on this card provide access to both digital input/output and a single analog input. The diagram below illustrates the GPIO pins available to the Octave IO Service (GPIO 1, 2, 3, 4 and ADC0) as well as current sources and ground. The voltage range for Digital Inputs on these pins is 1.8 volts.

IoT expansion cards can be used with both the mangOH and FX30. IO operations on these cards are supported in Octave. 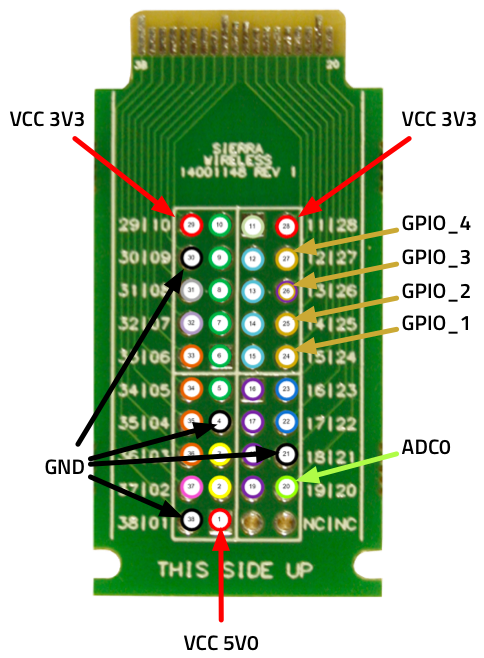 The open hardware standard means that you can implement different solutions on the card such as those shown here.

The following figure shows the pinout for the IoT expansion board included with the mangOH Red. 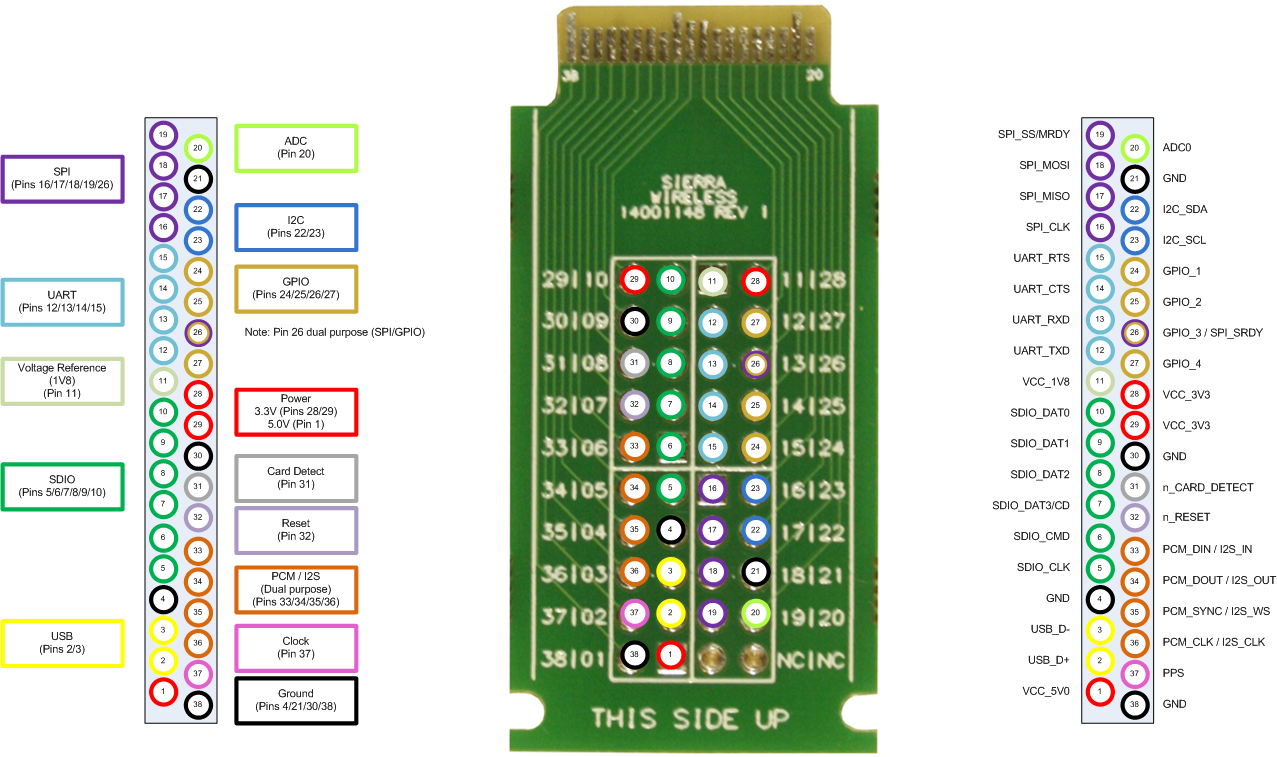 Where to Buy IoT Expansion Cards

A full list of IoT expansion cards is available here, however only a subset is supported on Octave.

The following are notable IoT expansion cards that work with Octave: