This topic provides a tutorial to help you set up and experiment with Octave Resource Protocol (ORP).

ORP is a simple ASCII-based protocol built on top of HDLC-framed data sent via UART, to allow communications between an asset and an Octave edge device. ORP is useful for connecting micro-controllers and application processors to Octave.

In the tutorial, your development machine will act as the asset and will be connected to either a mangOH Red using a USB-to-UART bridge, or to an FX30S using a USB-to-serial cable.

Your development PC will run a Python or C program through which you can enter high-level commands to create and work with Resources. The program translates your commands into ORP's underlying packets and sends them to the Octave edge device using ORP.

The tutorial's program will provide you with an understanding of how you might write your own program to run on an asset to communicate over ORP.

When experimenting with ORP, it can be useful to enable Developer Mode to see real-time updates of all creation, deletion, and value update events related to ORP on the Resources screen.

With ORP, you have a large amount of resources (up to 32) to interface your asset to the Octave device.
If you have more parameters than 32, the recommended way is to use ORP resources of JSON format, to carry multiple datapoints all together in one single Resource.

For this tutorial you will need:

Setting up the USB Connection

Follow the steps below to connect your Octave-enabled device to your development PC:

Ensure that the ground wire connection is made between the mangOH and your CP2102. Without it, the example application used later in this tutorial will not send/receive ORP commands/responses correctly.

Open a terminal window, run the following command to obtain a list of devices:

Locate the device in the output. The following shows examples of how the device might appear:

Open Device Manager, expand Ports, locate your USB-to-UART or USB-to-serial cable, and identify the COM port assigned to it. For example, in the screenshot on the left below, a USB-to-UART bridge has been assigned to COM3. In the screenshot on the right, a USB-to-serial cable has been assigned to COM6. You will use the COM port (e.g., COM6) as the name of your device later in this tutorial when running the example program. 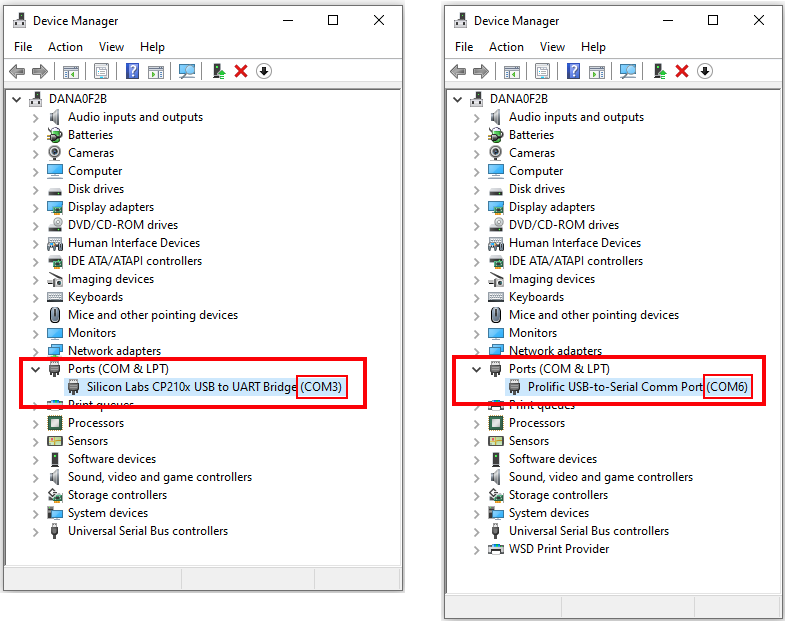 Follow the steps below to complete the configuration of your UART connection on the Octave side:

Ensure the device's UART is not already allocated in a Service, otherwise the UART cannot be configured.

The following screenshots show what these UART configurations look like in Octave:

Installing and Running the Examples

Follow the steps below to set up a Python environment and run the Python example:

For example, the following shows how to run the program with a USB-to-UART or USB-to-serial connection on COM3 of a Windows development machine:

Follow the steps below to set up and run the C program example:

For example, the following shows how to run the program with a USB-to-UART or USB-to-serial connection on /dev/ttyUSB0 of a development machine:

The example program allows you to create, update, query, receive notifications for, and delete Octave Resources over ORP by entering commands; its usage is summarized here:

The following examples show how to use these commands and how to verify the results in Octave.

Invoke the create command to create a new Resource. In this example, a new numeric Input Resource named compressor_reading will be created with no value assigned:

The Resource is created under orp/asset:

Example 2: Add a Handler to Watch for Changes on a Resource

Invoke the add handler command on the Resource to watch for changes to its value. After this has been added, any updates to the value (e.g. when a value is pushed as described in the next example) will invoke the handler, and the example program will display the information received by the handler.

Example 3: Updating (Pushing) a Value of a Resource

Invoke the push command along with the type of Resource and path to set the value of the Resource. In this example, we pass a value of 0 for the timestamp (which will use the current time stamp for the Event) and update the compressor_reading with the value 12345:

If a handler has been previously set up for the Resource as described in the previous example, then the updated information received by the handler will be displayed by the example program:

The updated Resource is updated in Octave:

Example 4: Getting the Value of a Resource

Invoke the get command and specify the path of the Resource to get its current value:

You can create a Resource that stores JSON data and then set its example JSON value:

A response similar to the following will appear for the example command:

In the Octave dashboard, the Last reported value for this asset should display the JSON that you assigned using the example command.

Invoke the delete command and specify handler along with the path of the associated Resource to delete an existing handler:

Invoke the delete command and specify resource along with the path of the Resource to delete:

The Resource is removed from orp/asset.

Events from an ORP Resource can be streamed by creating an Observation on that Resource. 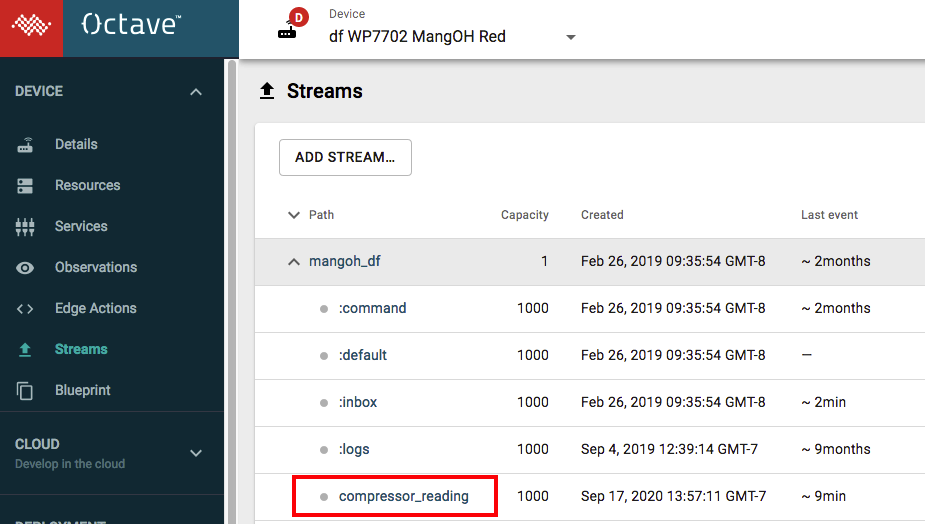 You can route values from internal assets to ORP assets using Observations.

The steps below illustrate how to route readings from a mangOH Red's light sensor to an ORP asset:

After completing these steps, Octave will now route values from the mangOH Red's light sensor to the light_reading ORP asset.